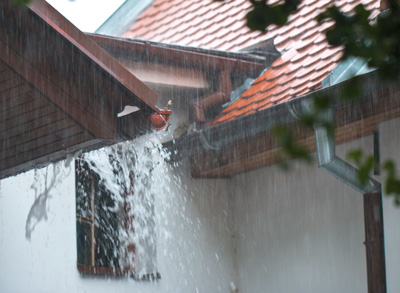 Many homeowners are aware of the durability and longevity of metal roofs. However, a common concern is that the metal makes a loud racket especially during heavy rain. Supposedly, all that pinging and clanking can lead to sleepless nights, or drown out the television. Is there any truth to this? Is metal roofing noise really louder than other roofing types?

How Loud Is a Metal Roof?

Rain, hail, branches, acorns, and other material falling on metal does create an audible noise. However, it does not lead to a hair-pulling level of volume that some people believe. Metal roofs are no louder than traditional shingle roofing.

It’s true that thin metal sheets are known for causing a loud reverberation when struck by an object. Modern metal roofing, though, makes up so much more than just the panels. The insulation also doubles as a sound barrier. New metal shingles are also made using a deep-textured fold design, which dulls out the pinging noise metal is known for. The airspace between the roof and attic also helps mask a lot of the noise pollution from outside.

A study by The Acoustic Group at the University of Lulea, Sweden, revealed that the noise emitted from rainfall to metal was only six decibels louder than rainfall to shingle. Humans can only register noise differential of eight decibels or more.

We thought we should also debunk a few other myths regarding metal roofs. Contrary to popular belief, metal panels do not attract lightning in a thunderstorm. They also do not inhibit mobile phone reception.

Give Allied Construction a call if you’re planning an exterior upgrade. We handle various projects ranging from fence to deck installations. Now that you know metal roofing is not loud, you can arrange for a roof upgrade without stocking up on earplugs.

Very pleased with the process, people and product delivered. HAD to remove / replace all of our 1970-era cabin tongue and groove roof, due to rot and ants. Allied got it done quickly, cleanly and a huge relief for all seasons here in the Cascades. Recommend? Yes.

Allied Construction did a fantastic job working with us to replace our 20 year old roof. They were very flexible and adjusted their schedule to meet ours. The roofer was a great worker, very attentive to detail and took our concerns seriously. He did a great job roofing our house and the roof looks awesome. We would definitely recommend Allied to anybody.

Random acts of kindness: My driving school kids and I were struggling with a low tire and a non-working pump at the AM PM in Monroe... and an Allied Construction Super Hero came to our rescue. Thank you! Your kindness is beyond words of gratitude.

Read All 9 Reviews
Leave Us A Review